Skip to content
Home » Biology Questions » Which of the following statements about ATP (adenosine triphosphate) is correct?

Which of the following statements about ATP (adenosine triphosphate) is correct?

A. As per the second law of thermodynamics, most of the free energy produced from ATP hydrolysis is released as heat.

B. The hydrolysis of ATP has a positive free energy change.

C. The hydrolysis of ATP supplies energy needed for pathways with a negative free energy change.

D. The reason that ATP hydrolysis to ADP and Pi releases lots of energy is the fact that the bonds between the two last phosphate groups of ATP are exceptionally strong covalent bonds, which is unique in nature.

E. The cycling between ATP and ADP + Pi provides an energy coupling between catabolic and anabolic pathways.

F. When an endergonic reaction demands more than 7.3 Kcal/mol energy, sometimes, two ATP molecules are hydrolyzed to ADP and Pi.

Answer: E (The cycling between ATP and ADP + Pi provides an energy coupling between catabolic and anabolic pathways). 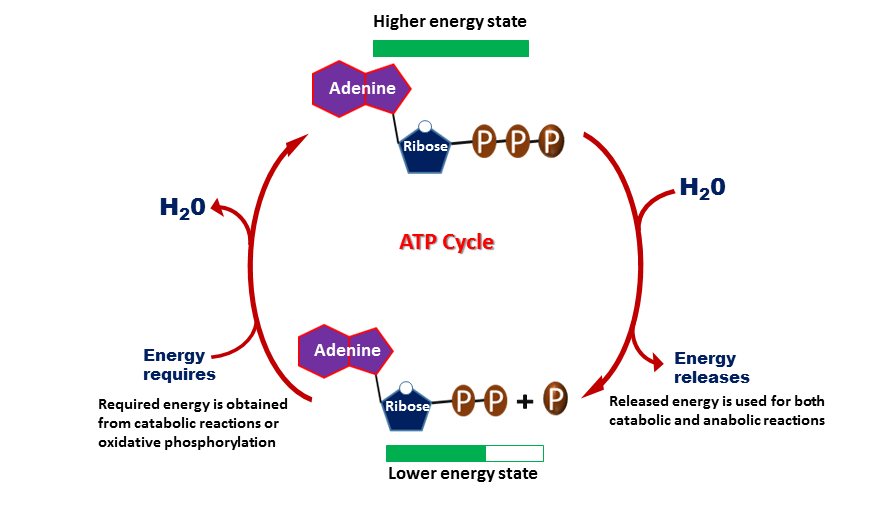 Hydrolysis of phosphoanhydride bond present between second and third phosphate groups of ATP molecule generates energy. Once the third phosphate molecule is removed, then the two-phosphate group-containing molecule, ADP will be generated. Similarly, energy will also be released when a second phosphate is removed from ADP to form AMP (adenosine monophosphate). The released free energy will be transferred to other molecules to make unfavorable reactions in a cell to get favorable.

Q. Thermogenin in the inner membrane of brown fat cell mitochondria does all of the following except?

Q. What is ATP synthase and what does it do?

Q. Which of the following eukaryotic cell structures plays a role in protein trafficking and sorting?

Q. After which checkpoint is the cell first committed to continuing the cell cycle through M?