Skip to content
Home » Cell biology » What are osteoblasts? | Function and differentiation of osteoblast

They are found in bone marrow as a single cell or group of cells. The osteoblast is also converted into chondrocytes, muscle cells, and adipocytes. 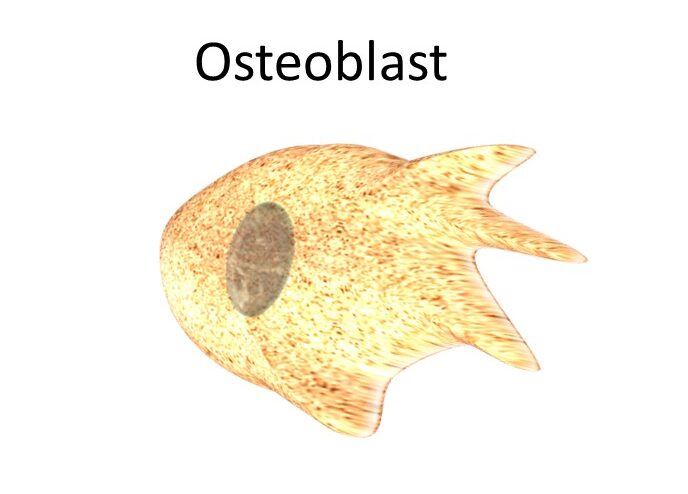 In general, matured osteoblast is surrounded by a growing calcified bone matrix; thus, the cell is trapped in a space called lacuna.

The trapped osteoblast later becomes a specialized cell called osteocyte, or bone cell. Osteocytes can interconnect with each other as well as with free surfaces of the bone through widespread cytoplasmic progressions that occupy long meandering channels (canaliculi) via bone matrix.

Osteoblasts can synthesize many cellular molecules including structural proteins, hormones, and enzymes as well as growth factors.

The studies have found that lipopolysaccharide and inflammatory cytokines including tumor necrosis factor receptor-alpha and interleukin-I directly induce the osteoclast differentiation and function, this mechanism is independent of osteoblast function and RANKL-RANK interaction.  Interferon-gamma and transforming growth factor-beta superfamily members are also found to be important factors for osteoclastogenesis. These studies have provided new strategies for analyzing the molecular mechanisms involved in osteoblast and osteoclast differentiation.

Recent studies in bone cell biology significantly changed the conceptions regarding regulatory mechanisms involved in the differentiation of osteoblasts and osteoclasts.

Runx2 and Osterix are known transcription factors found to be important molecules for inducing the differentiation of osteoblast cells. Smad transcriptional factors are shown to interact with other transcription regulators, including Runx2.

If there are no sufficient minerals for the bone formation or any osteoblast dysfunctions, then the osteoid will not mineralize appropriately, which leads to improper accumulation of osteoid. This condition resulting in emerging various disorders like rickets in children and osteomalacia in adults.

1. Which affects osteoblast and osteoclast activity?

2. What happens if you get too much osteoblast activity?

Answer: If osteoblasts get overactive, then more amount of bone tissue will be produced, which leads to bone enlargement.