Skip to content
Home » Biology Questions » Which of the following genotypes is homozygous recessive?

Q. Which of the following genotypes is homozygous recessive? 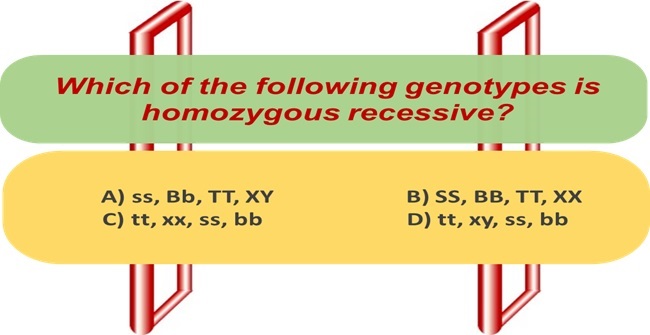 Explanation: Each gene contains two alleles, and they occupy the same locus on the chromosomes.

From the above question, S, B, T, and X are the alleles of four unique genes. Typically, in homozygous recessive conditions, they are represented in small letters. Hence, the correct answer is C (tt, xx, ss, bb).

Interestingly, female (XX) contains two copies of each gene on the X chromosomes, so these alleles can be homozygous (XX or xx) or heterozygous (Xx). However, males (XY) will express all the alleles located on the single X chromosome that they inherit from their mother. Hence, the ‘recessive’ or ‘dominant‘ concept is irrelevant in the case of the male genotype (XY). So, option D is incorrect even if it is represented in small letters (tt, xy, ss, bb).

Suggestion: Read more about genotypes and their types and frequency.

Q. Which cytoskeletal proteins provide the structural support for microvilli?

Q. What level of protein structure is associated with the sequence of amino acids?

Q. Which of the following pertains to typhoid fever?

Q. Which of the following tests is an agglutination test for the bacterium causing typhoid fever?

Q. Which of the following are characteristics of G protein-coupled receptors (GPCR)?

Q. What are the second messengers in the GPCR-phospholipase c signal transduction system?

Q. What are alleles? And an example.

Q. What is one difference between DNA replication of bacteria and eukaryotes?